Where did the usability term Wizard of Oz come from?

The term Wizard of Oz  (originally OZ Paradigm) has come into common usage in the fields of Experimental Psychology, Human Factors, Ergonomics and Usability Engineering to describe a testing or iterative design methodology wherein an experimenter (the "Wizard"), in a laboratory setting, simulates the behavior of a theoretical intelligent computer application (often by going into another room and intercepting all communications between participant and system).  Sometimes this is done with the participant's a-priori knowledge and sometimes it is a low-level deceit employed to manage the participant's expectations and encourage natural behaviors (though always, I would hope, with appropriate disclosure during the debriefing part of the experiments).

I coined that term around 1980 to describe the methodology I developed during my dissertation work at The Johns Hopkins University (my dissertation advisor was Professor Alphonse Chapanis, the "Godfather of Human Factors and Engineering Psychology").  Amusingly enough, in addition to some one-way mirrors and such, there literally was a curtain separating me, as the "Wizard", from view by the participant during the study.

Here's an interesting tidbit that you may not find in the literature: I did originally have a definition for the "OZ" acronym (aside from the obvious parallels with the1900 book by L. Frank Baum).  "Offline Zero" was a reference to the fact that an experimenter (the "Wizard") was interpreting the users' inputs in real time during the simulation phase.  Folks laughed at this lily-gilding as an expression of my acronymophillia and I eventually dropped it.

The OZ methodology is very powerful.  In its original application, I was able to create a simple keyboard-input natural language recognition system that far exceeded the recognition rates of any of the far more complex systems of the day.  The key enabling factor was that the system was designed to work in a single context (calendar-keeping), which constrained the complexity of language encountered from users to the extent where a simple language processing model was sufficient to meet the goals of the application.  (The processing model was a two-pass keyword/keyphrase matching approach, based loosely on the algorithms employed in Weizenbaum's famous Eliza program).

OZ was important because it addressed the obvious criticism:

Who can afford to use an iterative methodology to build a separate natural language system (dictionaries, syntax) for each new context?

The answer turned out to be:

By using an empirical approach like OZ, anyone can afford to do this; my dictionary and syntax growth reached asymptote (better than 90% recognition) after only 16 experimental trials and my resulting program, with dictionaries, was less than 300k of code.

Here are some of the original (and subsequent) references on the subject (the method has been picked up in many research domains, and there are numerous subsequent references, only a few of which are listed here).

Summary of the technical aspects of the work:

Brief description of the method:

The best description of the method:

The unpublished dissertation itself:

Subsequent References and implementations (a sampling of 20+ years of citations):

Dahlbäck, N. and Jönsson, A. 1989. Empirical studies of discourse representations for natural language interfaces. In Proceedings of the Fourth Conference on European Chapter of the Association For Computational Linguistics (Manchester, England, April 10 - 12, 1989). European Chapter Meeting of the ACL. Association for Computational Linguistics, Morristown, NJ, 291-298. [10]

The name of the experiment comes from The Wonderful Wizard of Oz story, in which an ordinary man hides behind a curtain and pretends, through the use of “amplifying” technology, to be a powerful wizard.

In David Lodge’s novel Small World, a university lecturer in English literature is introduced to a computer program named ELIZA, which he believes is capable of conducting a coherent conversation with him. It transpires that a computer lecturer is operating the computer and providing all the responses. 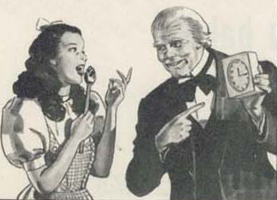